Beat the heat on Tuesday evening by attending a book signing in SF by new Raiders punter Chris Kluwe (@ChrisWarcraft) for his new book Beautifully Unique Sparkleponies (definitely not a children’s book). Chris is a very outspoken individual (in a good way!), and has been able to use his position as a public figure to address some social issues that have been previously taboo, particularly to professional athletes. Same-sex marriage is the biggest one, and most likely one of the the main reasons he was signing at Books, Inc. in the Castro. Chris didn’t do the traditional “read-a-few-paragraphs-from-my-book” appearance, rather he spent his 1/2 hour fielding questions from the audience. I’m not really one for public speaking, so I decided to hold my question until I talked with him in person.

Questions came from all over the map, ranging from political aspirations (he’s not interested) to Raiders’ coach Dennis Allen (a good guy), and whether he’s been able to attend any same-sex marriages (no, but he’s been invited to a couple in Minnesota that he can’t make because of the NFL season). One of the more interesting questions was his use of the word “hero” when referring to athletes potentially coming out while they’re playing. I may be paraphrasing the question a bit here (sorry!), but he was able to address it by referring to Jason Collins and whether or not he’ll get a new NBA contract after coming out this summer. Chris thinks this will be a benchmark for other athletes whether they want to test the waters—if Collins doesn’t make an NBA team, it could be a huge red flag for the sporting landscape (my words, but you get the picture).

I brought my wife Rhonda along to take pictures of the event (specifically to document him signing my book and talking with me). She was a bit on the fence about going, but really enjoyed the experience and loved how funny and intelligent Chris was. The book signing line wasn’t too long (probably 60 or so people all told, I was in the middle somewhere), but I always get nervous speaking to famous people. Finally, it was my turn. 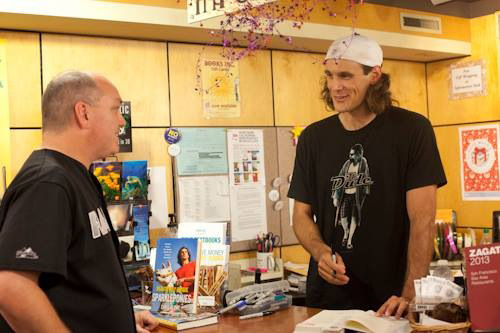 First off, Chris is tall. SUPER tall. I liked that he was wearing a “Dude” shirt from “The Big Lebowski” as well.

I thanked him for being here and shook his hand. Not too hard. I’m sure athletes get folks trying to go all death grip on their mitts just to show their alpha dog status. I was very cautious there as I was when I met Ken Stabler (my childhood football idol). While he was signing my book, I asked him if he had any difficulty or challenges getting his book published (research!). Surprisingly (to me), he said no. The publisher said that he had carte blanche to write whatever he wanted, since Chris really didn’t want to do the “traditional football book.” Particularly since his career isn’t even over yet! He’s got a fairly major publisher (Little, Brown, and Company), so it’s not like this was vanity press.

I mentioned that I was “a fellow libertarian,” and he sheepishly asked if I’d read his article on Ayn Rand (which is reprinted in his book, I believe). He went on to mention that it was difficult getting through Atlas Shrugged and that her characters didn’t have enough humanism (paraphrasing in my words). He continued on, and I started getting a bit nervous, because it was taking a few minutes and I knew there were 30+ people waiting behind me. It was awesome that he spent so much time talking with me (I wasn’t the only one), rather than just doing a quick signature and a call for “Next!”. Eventually after a quick snapshot with him, I thanked him again, shook his hand and wished him good luck on his Raiders season. 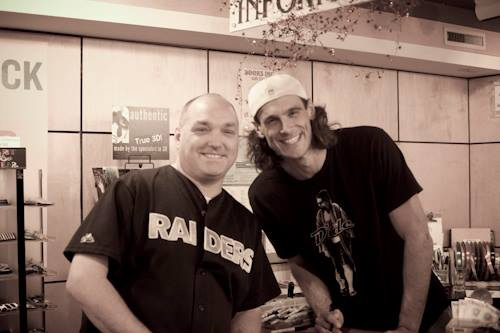 I loved that he was so genuine, thoughtful, and passionate about what he believes in. I do hope he reconsiders politics after his NFL career is over. We need people like him in office.

It’s been a while since I torched the cyberwebs and plunked out a blog post, but it’s been an interesting couple of years. During that time, I’ve found it difficult to sit down at my computer and write when my job is to sit at a computer for eight hours a day. These are the times I wish I was in construction, enjoying the fresh air, and not zip-tied to an office desk.

Anyway, over the past two years, I’ve taken two classes from Stanford Continuing Studies, both on writing. The Continuing Studies program, for those interested, typically consists of short, six-week classes on a specific subject (history, art, writing, etc.). In 2011, I took an Introduction to Screenwriting class from Adam Tobin (an erstwhile instructor at Stanford), where I used that time to polish some of my writing on my yet-to-be-named poker movie. I felt that the pressure of delivering pages on a weekly basis would be enough to jumpstart my screenplay and move me on a path to publishing. Alas, while I learned a ton in the course and had great fun, I’m a bit stalled on that project.

Which leads me to my recent pursuit, another Continuing Studies class, this one in Creative Nonfiction. Last year my friends and I joined the Golf Channel Am Tour—a series of organized golf tournaments in the SF Bay Area. I had a terrific time playing “competitive” golf, and wanted to write my experiences during that year. To motivate me, I’m taking this new class and look forward to sharing tidbits as my mood allows.

Thanks for checking in (whomever is reading this), and look forward to additional entries on a more regular basis.

There are only a couple of reasons you’d bring up dialogue when referencing a movie: if it’s really clever and witty, or if it’s stale and repetitive. Most of the time, you tend not to notice specific bits of dialogue in a film, because it comes off as a natural pattern of speech. “Tron: Legacy” is anything but natural.

Disclaimer from the get-go: I am a big fan of the original 80s “Tron.” I know it was a bit campy, but at least it was clever-campy, and had a fairly well-thought out plot. “Tron: Legacy” has a number of fatal flaws, most notably that even though it’s a 3-D movie, most of the characters are just flat, 2-D automatons.

The special effects are nice, and the 3-D (in the XD theater, no less) experience is pretty well-done. The filmmakers didn’t utilize the 3-D effects throughout the movie (which was nice), and didn’t resort to any cheesy “coming-straight-at-you in 3-D!” moments. The virtual (and younger) Jeff Bridges was fairly well done—way better than the digital actors in “Polar Express.” It’s just unfortunate that the effects don’t compensate for the plot and dialogue.

Which brings me to the plot of “Tron: Legacy.” The original “Tron” wasn’t well known for it’s plot, but when you have more complexity in an early-80s throwaway popcorn-muncher than a huge, 2010 blockbuster, something’s wrong. It’s all very linear, stale, and predictable. It also rips-off “Star Wars” over and over again, which is fairly obvious to anyone over the age of 8.

Finally, let’s address the script, or lack thereof. I can’t remember a recent movie with worse dialogue and acting (and believe me, I’ve seen about 100 films made since 2005 in the last year or so). It was shockingly bad, delivered in a wooden tone, and just plain dull. It’s hard to describe how atrocious the writing was, particularly considering that the screenwriters were the guys that worked on the “Lost” television series. Neither of the two screenwriters has a feature film to their credit (until now), and as a “Lost” fan, I was sorely disappointed there.

Needless to say, while I’m still glad I saw “Tron: Legacy” in the theater, where I received the giant screen, supreme sound system experience, the movie isn’t worth repeat viewings, and I hope they decide to skip a sequel.